When a mouse lands in the Glass Room, they must confront the indomitable basilisk. Is it possible to reason with the unreasonable?

Playable on mobile or desktop browser.

Made in 3 days for Ink Jam 2020, on the theme of "in case of trouble". Check out Small Saga, my other mouse-themed game!

Wow, I loved it! A well-written and something to ponder on. Thank you!

I don't usually like text games, but this one was really good. I have one question though: How do you get the ending other than bad and being eaten? I don't understand what the other ending could be, let alone how to achieve it.

Edit: nv i found it

Very often I try to play games of this kind and I can never enjoy them. Not even for 2 minutes. But this is very very well written! I can't believe I'm adding it to my "Only the very best of itch.io!" list. Thank you for this amazing piece!

It's actually pretty good. I can see it got some deep meaning behind some dialogue.

I usually hate these text based games but this one was pretty cool.

Really enjoyed the dialogs too like this one "Come on. Circle of life and all that. I bet I'm delicious. Top quality gourmet mouse. Sauté me in butter and garlic. Yum yum."

I cannot express how fascinated and interested I was in this story! Usually I don't like story games but this feels extremely well made and executed. I hope you create more high quality and great games like these. Best of luck!

Your writting is amazing! The game is so envolving and bring us to think and feel a lot, I'm amazed, really <3

this game is amazing and has a very insightful take on the meaning of life and predator versus prey.

This game is charming, funny, subtle and interesting. I will now look at your other works, for this little game has left me desiring more experiences with the same qualities.

This game has taught me something.

To think from different perspectives and understand people better. This was what the snake did while the mouse was simple. Just survive by any means. This game shows two different kinds of people and how they tackle problems which was unexpected because it was so simple and yet could convey such a powerful message, even if it was unintentional.

Great game, i hope for a sequel to this where we end up talking to god and maybe reason with him why we did certain choices

(e.g. God: Little one, it is unexpected of you to do such a thing. Nature's will was for you to try to run and escape and get eaten by the snake, why did you instead talk to him/kill him/betray him?)

or we try to do the same thing again but with god this time.

Looking forward to your future games! And one more thing, good luck for inkJam2020!

This is great. The pathways branch much more than I thought, and getting the slayer ending was incredibly satisfying.
Good job! It's great to have another look into your mousey world!

Nice!  Did you do the music?  edit: also nice art style

Thanks, I did do the music. If you're curious, the digital instruments were all freebies from Spitfire Audio's LABS.

There's a small typo in one of the links. After "Consider the mongoose," one comes across "Exactly." But it's misspelled as "Exacty."

This was so nostalgic for me, having fallen in love with Small Saga when I played the demo. Very much looking forward to the full release! Loved the artwork in this. You have such an eye for capturing power differences from the perspective of the small (but mighty) and evoking in us both the fear and the bravery felt by our Protagonists rodentia. (😜)

Reply
The pillar men2 years ago(+1)

how do you get the other ending? i can get bad and freedom but the other one alludes me

Try having a violent mindset from the start!

Reply
The pillar men2 years ago

Reply
The pillar men2 years ago

And I found a misspelling. The mouse get's the only option to say "Exactly", but the "l" is missing :-)

Strange - I thought I caught that typo. Maybe webgames takes a little while to update.

For the third ending, choose "I have to fight", then work towards the freedom ending.

Oh, I totally forgot to say that I enjoy this little piece of a game quite a bit :-) I like your writing, that's also why I can't wait for "Small Saga" to launch, I loved the demo :D 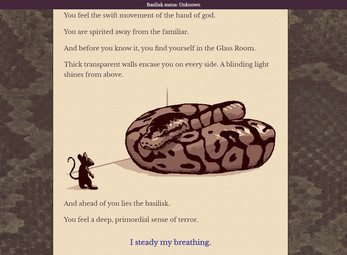 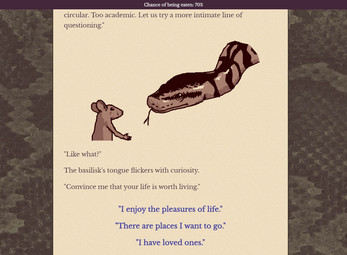 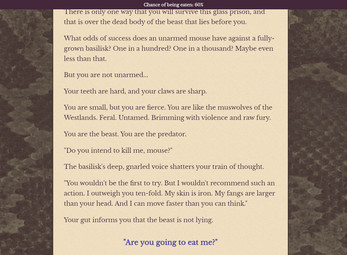